Kate Meehan: on Aesthetic and Being Totally Lovely 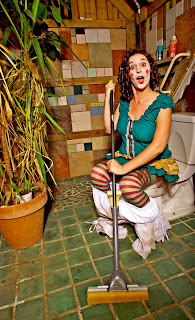 Kate Meehan has been performing with La Fenice since it's very first show as Austin Commedia Society back in 1999.  Over the years, she's played a number of the Commedia stock characters with us, and currently serves as Managing Director.  Before joining ACS, she performed on many famous Chicago improv stages, including ImprovOlympic and Second City.

How does La Fenice's approach to Commedia differ from other Commedia dell'Arte troupes?
Well, I've really only created Commedia shows with La Fenice, but for the last few years I've been in touch with a whole lot of different performers.  Apparently, we're pretty unique in the United States in that we're performing Commedia outside of Renaissance Faires, the confines of a Goldoni script, or a proscenium stage.  We perform in bars to keep things risky - usually at least half of our audience was unaware there would be a show that night, and it means we don't have the luxury of a trapped audience.  They can ignore us, talk over us, throw bottles and loose change or just leave.  Our job is not only to keep their attention, but to convince them at the end that what they saw was valuable enough to dip into their wallets.

How well does that work, with the masks and such?
Pretty well, actually.  We've morphed our aesthetic over the years to suggest a sort of vague historic past, with stock characters pulling visual references from characters our audience already knows.  Pantalone, for example, is based off the Monopoly guy.  The masks and big shiny costumes cue our (likely drunk) audience in on the kind of over the top theatricality of our shows, and sort of prepares them for some of the bullshit conventions we try and pull later.

You're playing the young Lover this time?
Yes, a bit of a stretch, huh? At least I'm paired with Aaron, who is even more elderly than I am, instead of young Tate.  Sloop [of the Damned] made me feel like total a cougar.  I began playing the Lover with Austin Commedia Society back when I was, more or less, the Lover character in real life - obnoxious, loud, and with limbs a little too long and spindly for any real grace of movement.

Not much has changed.
That's totally true, except now I've got a lot more person to cram into the corset and am sporting these grey racing stripes.  Genevieve [Kinney] usually plays our lovers, and she somehow manages to explore various permutations on the Elegant Lady every time.  This is the second time I've picked the Lover back up since La Fenice reformed, and I'm trying to keep from making her too crusty, to just allow the character and myself to be lovely without making any commentary.

What do you mean?
Well, there's this strange attitude that's apparently pervasive among female comics.  They can be attractive, but you don't run into material from Cloris Leachman or Lucille Ball or even Tina Fey and Amy Poehler about how good looking they are and some of them will go out of their way to actively remove their femininity from their acts, talking and behaving in more masculine patterns, but there's no denying that they're all a bunch of total foxes.  In part, I think it comes from tending to be one of very few ladies in a dude's world - no matter how many manicures you get or how well you walk in heels, your testosterone starts to pique and you become less comfortable playing femininity in truthful ways.

I assume you mean the Royal You.
I always do.  Unless we're talking about doing dishes or picking up squished cockroaches, in which case, I mean Actual You.  I did a show during the Great Commedia Hiatus where I played this punky angel for the first act of a show, and a rapist-tormenting succubus during the second act.  The succubus role was really hard for me.  I remember being fairly confident someone would stand up in the middle of the show and call me out for farting into my corset and bustle, or point out how wildly uncomfortable I was with the slinky vixen thing.  I've never felt so exposed and awkward in my life, and I've done some really ludicrous things on stage.

Back up.  You were farting into your bustle?  Is that what chicks do into those things?
Well, yeah.  With all those voluminous folds, it's hard to resist filling them like a hot air balloon and there's  a lot of gut squeezing with corsets.  When the review came in for that show, the reviewer said I had played the role of a succubus too narcissistically, but playing the angel like I had just been hit in the head with many hammers and was suffering from Tourettes was called "spunky," so I guess it reinforced the notion for me - stick to what you know, and cling to the fart jokes and on-stage jitterbugging and leave being ladylike to the dancers.  So, you know, the first Lover I played when we re-formed was a sexual being, but in an aggressive, hyper-masculine way. It was actually a totally cowardly move.

So this time?
Well, first of all, I'm going to sing like a freaking Disney princess.  Then I'm going to be so damned lovely, you're going to want to paint my picture like one of your French girls, Jack.  And somewhere in there I'm going to be funny, too.
Posted by Kate at 6:07 PM