Aaron Johnson: On Technology, Collaboration, and our Summed Parts. 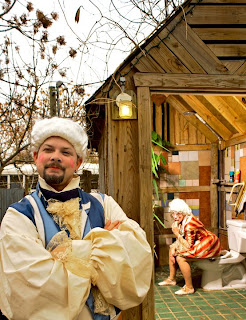 Aaron Johnson serves as La Fenice's Artistic Director, and is currently playing Orlando, the male lover, in our next show.  In this interview, he speaks with Managing Director and long-time collaborator, Kate Meehan.


Were you looking at pornography?
Yes, if by pornography you mean our scenario.

We're using technology this time around.  Talk about that.
We're chronicling the way we work in a way that probably isn't entirely new to us, but we're employing it more consistently.  We have the scenario, which was started as a very simple sketch of a plot, and over the time that we develop new material, we're now able to do live updates through Google Drive.  In fact, while you guys were working on the song, Tate and I were actually making jokes back and forth together, editing one of our scenes in the scenario simultaneously in real time.  So, he would enter a line and would suggest my reply, and I would edit it to say "what if I said this instead."  It's pretty nifty. We didn't want to interrupt the good work that was going on, so we worked collaboratively by typing.

So, when we called you out for having your faces in your gadgets in rehearsal, we were being jerks.
Yeah, we were actually working.

As the Artistic Director, you tend to get bullied by the rest of the company.
That's okay though.  I mean, that's the nature of working in a collaborative form.  Different people drive at different times.  Everyone tends to be very open to ideas, but also has to be responsible for shutting a process down if we're getting off track or if things aren't working.  I've studied a number of groups working collaboratively over the last year, and in class last semester we watched some behind the scenes production work from a company called Mabou Mines up in New York.  It was really interesting to watch their collaboration process alongside more traditionally trained actors, because they found their process extremely creative and innovative, but I found it to be very natural, the sort of interactions.  It's the same thing as here.  You're in a room full of people with very strong personalities, and you're sort of editing toward the best idea for the work that you're doing.  As a result of that, I changed my designation on our Facebook page.  I believe I was originally called the Artistic Pushover, but I changed it to Artistic Distractor, because I thought it mirrored the word "director" a little better and it's probably more accurate to what it is that I do.

Well, the tasseled pasties you wear to rehearsals are a bit distracting.  Especially when you set them wagging in opposite directions.
Hey, when you've got skills, you don't always know you're displaying them.

But to talk about the group we're working with, I feel that everyone in this show comes playing their A game whether they want to or not.  We've certainly gotten older and potentially wiser, but we've also gotten more efficient.  People are able to work fast and funny.  We're a commedic version of the Borg.

No way, dude.  We're summed parts.
The newest performing member of our troupe is Gian [Giacomo Colli], who has more experience than most of the rest of us combined.  I know he's having to learn a new process, - oh wait.  He's right behind me, isn't he?

Oh, man.  No, that went straight to the cutting room floor.  Thank God.
Genevieve is getting to go back to Columbina, which is something she's wanted to do for a long time.

We're actually a bunch of Fascist jerks for not including that burning desire while we wrote our scripts.  By "We" I'm using the Royal We.  But I'm including Adam.
The Royal We is a total pain in the Us.

Truth.
Genevieve is getting a chance to play Columbina, but because of the construct of the show, she's now in the position of playing Columbina in a very different way than she ever has before.

How many shows have you and I done together?

I can't even start to count them.
More than a couple, basically.  I'm actually enjoying doing Lovers with you again.

I think the only time we've played the Lovers together was the pick up show we did of Family Jewels where I kneed you in the jimmy in the middle of the show.
Yeah, where you were drunk?

Yes, totally.  But, to be fair, it was my 21st birthday and people kept buying me shots before the show.
And you didn't actually get me in the junk, you frogged me on the top of my thigh.

Really?  I had this huge bruise on my shin afterwards.  I wonder how I managed that.
Yeah.  You didn't get me in the junk, because that probably would've stopped the show.  You were flailing about quite a bit.

Ah, youth.
But yeah, I think you're right.  I think that was the only time we ever played Lovers together.

Bruce, of course, doing music, is a great comfort.  Working with a musical genius is awesome.  I mean, we just sort of hummed some stuff to him and sent him away, and by the time he came back, we pulled together a three part operatic number.  It's encouraging, but not surprising when you've got Bruce around.

Am I missing anyone?

I hope not, or you'll look like a real jerk.  Any parting words?
Um.  People of the Philippines, I shall return?  Old soldiers don't die, they just fade away?  Thanks for this interview?