Giangiacomo: An Italian trapped in an American Commedia 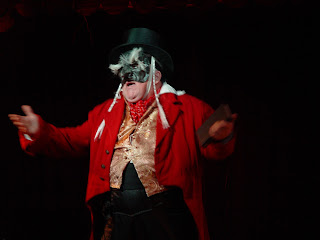 Gian Giacomo Colli comes from a family of commedia dell'arte performers and practitioners. He holds an MFA and a PhD, and is the only actual Italian performing on our stage. In the past, he's visited as a guest director, flying in to tidy up shows at the last moments before performances. After many moons of cajoling, harassment, and plying with wine, he finally agreed to join us as Pantalone in For Whom the Dong Tolls. We caught up with him, now that we've performed the show a few times, to see what performing his native theatre for foreign audiences has been like.

We've worked with you previously as a director (sort of), but this is your first time performing with us. How is La Fenice's process different from our foreign counterparts?

Well, it's different in the sense that everything is improvised. With La Fenice, we start with a scratch of a scenario while in the past I've always started from a very well developed scenario. With a scratch scenario, more of the development is done onstage than when you begin with a fleshed out scenario. Improvising. That's the big difference for me.

Well, it's not hard. Actually, it's fun. No, actually it was hard because I felt, and to an extent I still feel, not so much for the action or physicality but for the language to understand and to develop verbal lazzi. Sometimes when you all get going I don't entirely understand what's going on. I mean, I think I have a general idea, but especially when you're discussing cultural references, sometimes I get lost. That's the only tricky part, but it's a different process, and it's been fun.

You understand how important it is to have a really good feeling for the other people in the company. To know how they perform, and the kinds of things you can expect from them. That's very important.

How easy is it to improvise in, what, your second? third language?

It's okay to improvise, but I feel like I'm kind of improvise. I can't use the language to it's full power, so there are lots of moments that aren't as verbally crafted. In Italian it would obviously be much easier to create jokes. In English, I'm kind of limited.

So, next time we'll just have you do the show in Italian and we'll just figure out a way to subtitle you.

That would make sense, but I'd still have to understand some of your weird cultural references.

The style of our show is a little different from the commedia going on in Europe.

Commedia in Europe - France, for example, or some of the Spanish troupes, the big traditional theaters aside like Piccolo Teatro and their Servant of Two Masters, you see a strong connection with the popular roots of commedia, the low-class tradition.

Yes, many street performers. There are double aspects in Europe. It can be either very political, like Dario Fo, or it can just be pure entertainment, very circus-like, but still you can see a very local connection. That's where the language becomes important, it is tied to the place and the audience. You can see it in Italy and France.

Here the language is much more important. Here's it's much more about the connection with the characters. There's a sort of American idea of commedia, a sort of cultural idea that isn't the same as Europe.

So the idea of Commedia is different in America than it is in Europe?

Europe has a historical connection that goes back to the Renaissance, maybe not straight back, but there is a practical development of the form that happened there. Here, commedia was more of a recent rediscovery, like in isolated parts of Europe, like Russia in the 1920s and 30s. A sort of perception of commedia as popular theatre that was at the heart of the interest in it.

So it's more of an American reinterpretation?
I wouldn't say reinterpretation, exactly, but there is a different sort of perception. Again, there are elements that belong to American commedia that are perfectly right that aren't as at the forefront as European commedia. Maybe it is a reinterpetation. Maybe it's that Americans can go to the historical renaissance and pick and choose what is important in their interpretation, but in Europe it's continued to evolve, so there are expectations.

That makes sense. Most of the troupes we are familiar with in the US, with some exceptions, are based in Renaissance Festivals or related to historical reenactment of some kind. Or it's a "commedia - inspired" production, which is taken to mean more of a masked, avante-garde circus.

That's the difference, I think. In Europe, commedia was born in the renaissance but there was a continuation, and then a transformation in the 18th century. The vision of Commedia in france and all of the revisions there. There is a continuity of performance in Europe that is an entirely different cultural element than in America. But that's okay. I don't know what's happening in south america, but I'm sure it's reflective of their development.

I think that I'd like to keep working with you. It's been fun, and I want to keep developing our show. This one. We should do that.
Posted by Kate at 4:56 PM No comments: